Safaris in the Ngorongoro Conservation Area

The Ngorongoro crater and conservation area ranks right up there among Africa’s most popular wildlife destinations. Almost everyone wants to come here and see this amazing natural phenomenon on their trip to Tanzania - and rightly so. 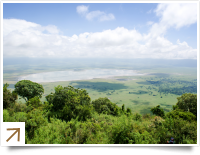 The Ngorongoro Crater was formed by a giant super volcano which would have been even higher than Kilimanjaro. Over time, its collapse caused a giant crater with an area that covers 8,300 square km.

The crater itself lies in a cluster of other volcanoes that border the Serengeti and incorporates forests, peaks, valleys, rivers, lakes and savannah.  The conservation area is alive with wildlife and the crater floor is dominated by a huge flamingo-filled alkaline lake.

Lions, hyenas, jackals and leopards are often seen here, as are herds of other plains animals, such as elephants and zebras. A visit to the crater is a photographer’s dream – there are so many subjects to film!

There is a wide choice of accommodation in and around the conservation area and we can offer you a range of hotels and lodges if you are planning an Ngorongoro safari independently. Just get in touch with us before you plan to go and we will be able to advise you with regard to transfers, lodges and tour packages.

Below are a selection of our tours that visit Ngorongoro as part of the itinerary.

A unique opportunity to explore two different parks all while based in one place.
Ngorongoro